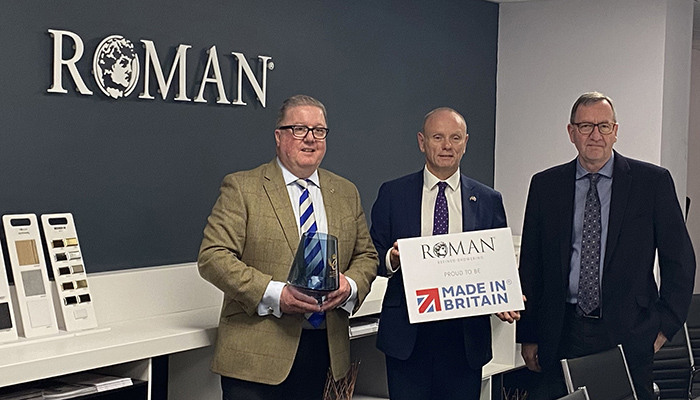 
Newton Aycliffe-based shower designer and manufacturer Roman welcomed Mike Freer, the Minister for Exports, and Paul Howell, the MP of Sedgefield, to its headquarters in County Durham.

The visit involved a tour of Roman’s 400,000sq ft manufacturing facilities, infrastructure and showrooms – while discussing product compliance & testing; the global shipping crisis; and the timing of Britain joining the to the Trans Pacific partnership (CPTPP).

Roman is one of the largest employers in the constituency and was keen to highlight inequalities in international trade tariffs and the evolving UKCA product marking system. The company says that Paul Howell has been 'a great ally in supporting these issues'.

David Osborne, CEO of Roman, commented: “It was an honour for the Minister to take the time to visit our headquarters today involving a factory tour and a discussion on our International business. We gained some valuable insights into forthcoming legislation – most importantly for Roman, the UK’s accession into the Trans Pacific Partnership which will significantly assist our exports into the Asia Pacific region.”

Pictured left to right: David Osborne, CEO for Roman; Mike Freer, the Minister for Exports; and Paul Howell, the MP for Sedgefield.