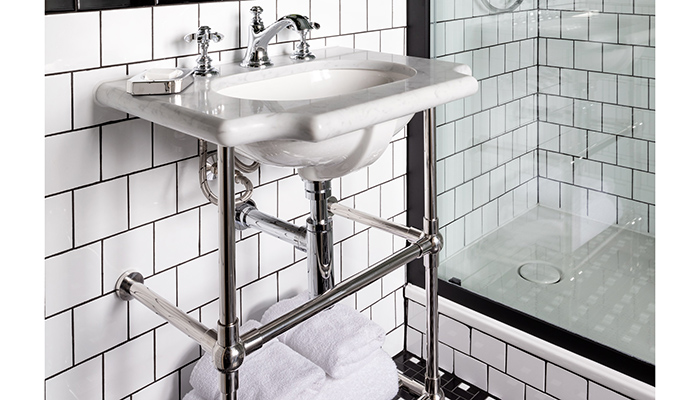 
The recently launched Randolph Hotel by Graduate Hotels in Oxford has undergone a comprehensive refurbishment since its purchase by owner Adventurous Journeys (AJ) Capital Partners, with Bette glazed titanium-steel shower trays featured in the hotel’s 151 rooms and suites. The hotel joins the new Graduate Cambridge, to launch as the first UK hotels in the collection, which also includes 30 hotels in university cities across the US.

An Oxford landmark in the heart of the city, the design details for the Randolph Hotel by Graduate Hotels include bold hues and architectural elements inspired by the hotel’s heritage, and locally inspired art which tells the stories of Oxford’s past. The extensive renovation included all of the common spaces, the lobby and guest rooms, including a spa with treatment rooms, a sauna, steam room and jacuzzi.

The bathrooms feature BetteUltra shower trays from Bette. They are made from fully recyclable, durable and easy to clean glazed titanium-steel. Available in a wide range of sizes from 700 x 700mm to 2000 x 900mm and 1800 x 1000mm, they were selected in 14 different sizes to suit the individual bathrooms at the hotel.

Interior designer, Karen Van Eeden, director of Upperworth Studios, said: “The refurbishment of the Grade II listed Randolph Hotel by Graduate Hotels in Oxford called for the guest bathrooms to be fully renovated. All bathrooms were changed to have walk-in showers instead of shower over baths. The team decided to use Bette shower trays due to their durability and high quality, important for any hotel specification. Although standardisation of sizes was our preferred choice, it helped that Bette shower trays come in so many different sizes, to suit every room type. Many thanks to Bette for continually providing great quality products.”