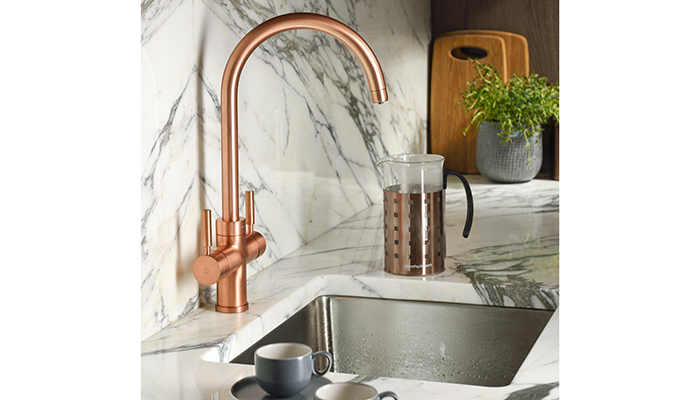 
Abode has announced the launch of the new Flow Limited Tap Collection: a range of water-efficient taps, which use up to 97% less water per minute thanks to the specially designed flow-limited aerators that reduce the flow rate, but not the pressure.

All kitchen taps in the new collection are available now on workable lead-times, WRAS Approved and delivered pre-assembled with 5lpm aerators to limit water flow rate. Models include Pico Swan AT1226, Pico Quad AT2134, Globe AT2146, Althia AT1258, Quantic AT2070 and New Media AT1180 mixer taps, plus Pronteau Prostyle and Pronteau Prostream 3 IN 1 Steaming hot water taps, which provide hot, cold and filtered 98° steaming hot water on demand.

Aside from Chrome, other finishes and flow limitation levels are available on request although subject to extended lead times. Customers can special order one of the new Flow Limited tap designs in Chrome and it will be on site within 8 weeks of purchase with other finishes up to 12 weeks.

Paul Illingworth, design manager at Abode, said: “As conservation measures continue to influence both residential and contract interiors, we feel it’s the right time to introduce a ready to order range of Flow Limited Taps for the development sector to better serve the UK homeowner. We are finding that designed-in sustainability is a big topic right now and given the energy price cap from 1st April, the trend to reduce energy is running in parallel with water-use efficiency.”

Leanne Adamson, marketing manager at Abode said: “In anticipation of the Government’s Future Home Standard, where homes and businesses will have to meet rigorous new energy efficiency standards to lower energy consumption by 2025, we are proud to offer six of our most popular mixer tap designs for the modern kitchen, alongside two of our Pronteau steaming hot taps. Our new water-saving collection is outlined in the newly released Sink & Tap Specification Manual, specially curated for the luxury development market where the Flow-Limited Collection sits alongside Pronteau, and our premium range of designer sinks and taps also by Abode.”