KitchensProducts Thu 5th May 2022 by KBBFocus 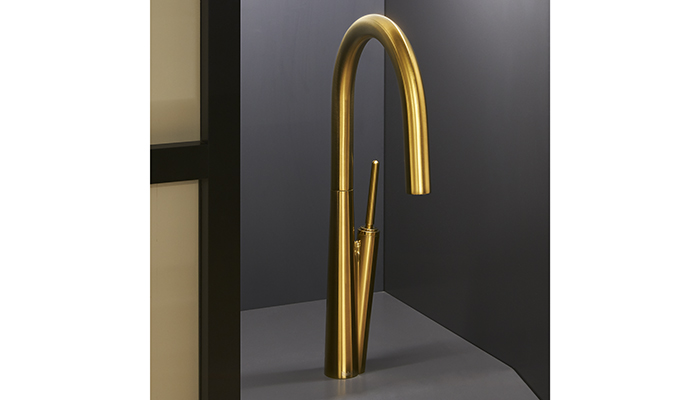 
Riobel is expanding its kitchen brassware collection with the introduction of the Solstice tap. Already a success in its native Canada, the brand believes the Solstice tap is set to enjoy the same level of acclaim and recognition in the UK.

The Solstice is one of five new taps in the Riobel kitchen collection, and comes in Gold, Black, Chrome or Stainless Steel finishes. Tall and sleek with a slender handle, it incorporates Riobel’s patented 2-jet Boomerang spray technology with an integrated 360 swivel. This flexible and effective tool is accessed by a catch placed behind the spout that doesn’t interrupt the sleek lines of the tap. The hand spray itself retracts quickly into the spout – the braided nylon hose reduces friction between the pull-down hose and faucet spout for quieter operation.

"One of our most striking and original designs, the award-winning Solstice tap looks beautiful in any kitchen it graces. Plus it offers a high level of functionality thanks to its inbuilt Boomerang technology. Since its launch last year, Riobel has received an exceptional reception from designers, architects and showroom retailers, and we’re very excited about the introduction of Riobel to the UK market," said Emma Joyce, House of Rohl brand manager, EMEAA.

The Solstice tap is backed by a limited lifetime warranty. For further details about Riobel, click HERE.
The House of Rohl London showroom can be visited at the Design Centre, Chelsea Harbour.