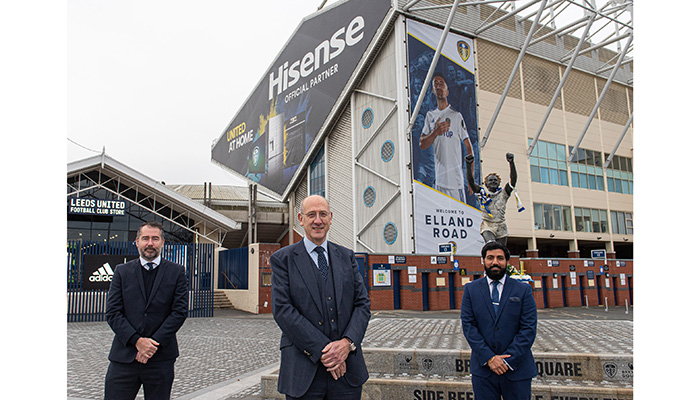 
Chinese appliance and consumer electronics brand Hisense has announced a two-year agreement with Leeds United to become an official partner of the club. The new partnership will see Hisense, whose UK headquarters are in Leeds, support the newly promoted club in an initial partnership which includes LED perimeter advertising, media interview backdrop branding and extensive branding of the prominent east stand. The deal will also see Hisense televisions installed at both Elland Road and the Thorp Arch training ground.

Leeds United will be working alongside Hisense UK to spearhead the brand activity, including exclusive fan offers, sponsorship optimisation and innovative brand activations showcasing the latest brand technologies over the next two seasons.

Howard Grindrod, Hisense UK’s vice president, said: “Leeds United is a huge club with an iconic stadium, so we’re delighted to announce this profile partnership with one of the biggest clubs in England. We have a wealth of experience within the football sector internationally, and this is a fantastic opportunity to involve ourselves in a partnership with a Premier League club – even better that it’s a club on our doorstep.”

Paul Bell, executive director at Leeds United added: “We are delighted to welcome Hisense into our official partners programme. As one of the leading consumer electronics brands in the world is further testament to the strength of the Leeds United brand that Hisense have chosen to partner with the Club on our return to the Premier League. We look forward to working with the team at Hisense to showcase their latest technologies and help to grow their brand presence within the global consumer electronics market.”