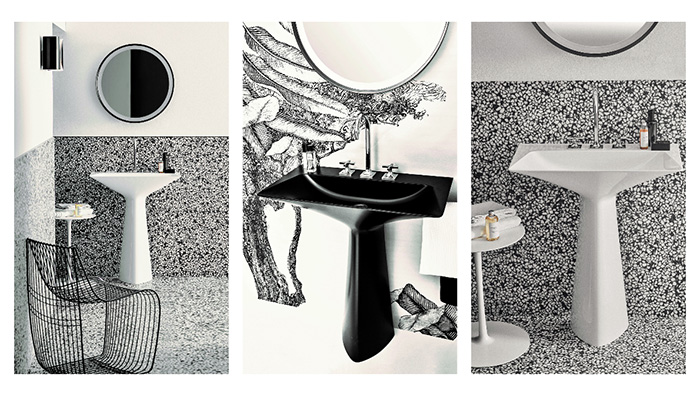 
Ideal Standard’s Together World Tour event series created specifically for the international architecture and design community, stopped in London on 23rd September for the third of six events taking place across the globe.

Following on from the first two events in Milan and Berlin, which saw the brand launch the new Linda-X and Extra ranges from its new Atelier Collections, the London event premiered Tipo-Z, the flagship piece from Atelier and a modern reimagining of Gio Ponti’s Zeta basin, created by the Italian architect and designer in 1954. Tipo-Z has been cast as a single piece, with no gap between basin and pedestal, creating a complete, singular form which would not have been technically feasible in 1954. The collections are the result of the partnership with Italian design studio Palomba Serafini Associati (PS+A) and its co-founder Roberto Palomba, who is also Ideal Standard’s chief design officer.

The latest film in the series showcased London’s creativity and its influence on design the community, including the development of Tipo-Z. The event was the first in the series to be premiered at a physical event, the Design London exhibition, as well as being streamed live from the Together World Tour microsite. At the exhibition, Ideal Standard also hosted sessions based on the key themes explored in the film and attendees at Design London were also able to experience the first UK showing of the Atelier Collections at Ideal Standard’s booth.

Commenting on the event, Jan Peter Tewes, joint CEO of Ideal Standard International, said: “For centuries, the rich diversity of London has allowed it to lead the world in design, art, music and more. The mix of its boroughs and cultures helps create the energy that London is known for, and is something we were intrigued to delve into a little deeper. It was great to be joined by the international design community online, as well as by those attending Design London in person, to explore how that distinct London attitude has contributed to the launch of Tipo-Z.”

The next event on the Together World Tour will take place in Paris, with the final two events in Dubai and Shanghai.