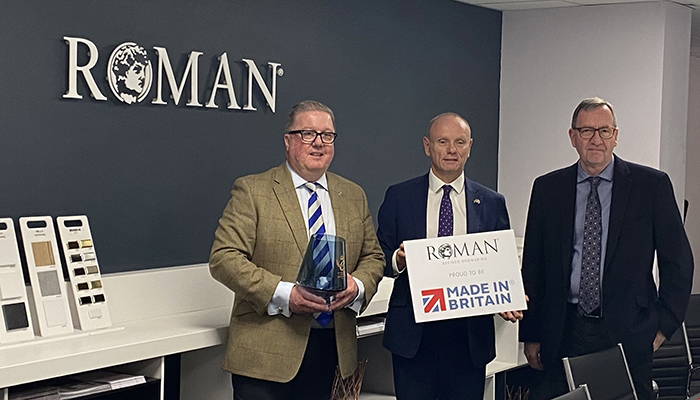 
Roman has received a Queen’s Award for International Trade, marking the second time that the leading shower designer and manufacturer has received the accolade.

Durham-based Roman was one of 225 businesses and organisations across the country to have been honoured with a Queen’s Award for Enterprise, with Roman celebrated for its excellence in International Trade. It previously received the honour in 2017.

The most prestigious award that a UK business can win, the Queen’s Award for Enterprise celebrates excellence in export growth over a three-year period. All aspects of business performance and best practice are covered, with a particular focus on sustainability.

Roman's "consistent and creative" approach has seen it enjoy significant growth across all UK market sectors, with strong international growth over the last five years. It currently supplies products for projects in 72 markets around the world.

The Queen’s Award is made on the recommendation of the Prime Minister, following the examination of applications by an Advisory Committee composed of leading professionals with backgrounds that span industry, commerce, trade unions and government. Awards are then granted by Her Majesty Queen Elizabeth.

Representatives from Roman will be invited to attend a reception at Buckingham Palace hosted by HRH The Prince of Wales, and there will also be a ceremony held at Roman's County Durham headquarters. This will see Her Majesty The Queen’s local representative, the Lord-Lieutenant of the County, present the Award.

Speaking about the win, David Osborne, CEO of Roman, said: "We are all immensely proud of this huge honour – and to be awarded a second one makes it even more special. The Award is recognised all around the world and we know that this accolade will further strengthen the Roman brand nationally and internationally".

Pictured left to right: David Osborne, CEO for Roman; Mike Freer, the Minister for Exports; and Paul Howell, the MP for Sedgefield.