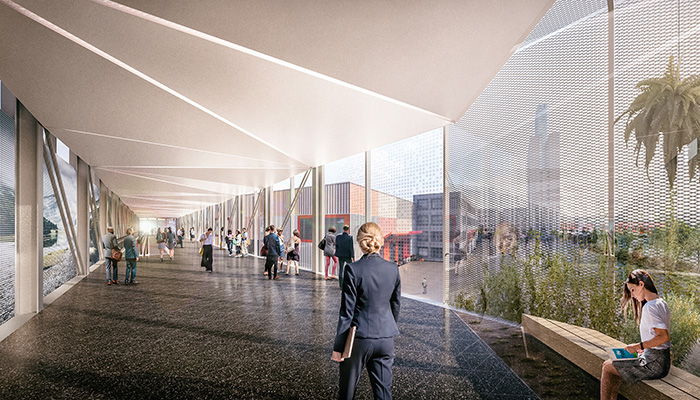 
Messe Frankfurt – organisers of global bathroom trade fair ISH – has announced that the Sparda-Bank Tower and the new Messeplatz entrance will be built on its exhibition grounds on Europa-Allee by 2025. This will create a new entrance in the south for the exhibition grounds, located directly at the future underground station in the Europaviertel. In addition to the construction of the new Hall 5, which will begin in February, Messe Frankfurt says the realisation of the Messeplatz entrance, including a connection to the Via Mobile, is the last milestone in the modernisation of the exhibition grounds. The development began with the structural or master plan in 1980.

With the design of the new Messeplatz entrance, Messe Frankfurt has finalised its inner-city exhibition grounds, which will now be easily accessible for all visitors from all directions in the shortest possible time. The Via Mobile covered and glazed transport system with moving walkways and escalators that link the halls will connect the new entrance with Hall 12 and all other halls at the fair. The almost 5,000sq m new entrance building includes a spacious reception hall with access control systems, event and conference rooms and a café/bistro, which will be open all year round.

In order to keep the logistical restrictions in the outdoor area behind the Cargo Center as low as possible, the Via Mobile will be realised as a bridge structure with only two concrete support structures. The goal is to complete the new section of the Via Mobile, which will then be around 1.7km long, for the opening of the new Messeplatz entrance. Work is expected to begin in 2024.