House of Rohl collaborates with 2LG for concept bathroom at WOW!House 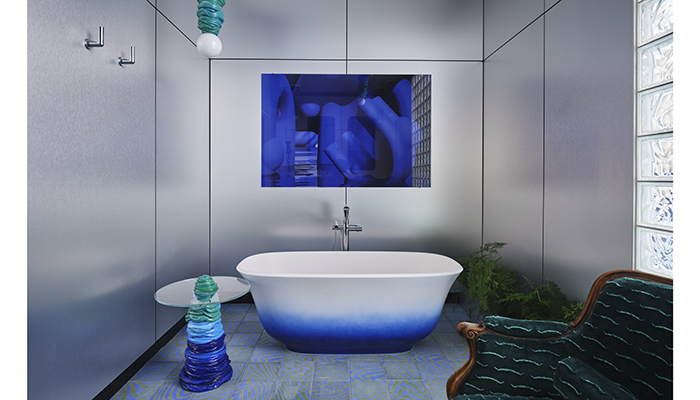 House of Rohl collaborates with 2LG for concept bathroom at WOW!House


Until 1st July, The House of Rohl – the newly formed family of luxury bathroom and kitchen brands including Victoria + Albert Baths, Perrin & Rowe, Shaws of Darwen and Riobel brassware – will be presenting a show-stopping concept bathroom at the WOW!House, an exciting new exhibition at the Design Centre, Chelsea Harbour.

The design is conceived by Jordan Cluroe and Russell Whitehead of 2LG Studio – two designers known for their fresh thinking and bold concepts, and now familiar to many through the new Changing Rooms TV series.

The bathroom is said to be 2LG Studio’s Cave of Wonders – a space to escape to that offers a sensory experience akin to a holiday, representing a separation from the ties of everyday life. House of Rohl gave 2LG Studio an open brief, providing that it met the exhibition promise of ‘WOW!’. So Jordan and Russell chose a house muse, Billy Porter, and the space is a playful ode to the American actor, singer and author.

Russell Whitehead from 2LG Studio said: "He’s such an icon of fashion and an incredibly lovely human, so we wanted to take his approach to life and create this bathroom space for him to indulge his senses. The combination of luxurious vintage upholstery with retro glass brick and the stark modernity of brushed steel should appeal to his distinctive aesthetic."

Stalactite lights have been commissioned by 2LG from artist James Shaw, and their remarkable extruded shapes, made from recycled plastic, create a moment of pure theatre.

Beneath the lights are Victoria + Albert’s Amiata baths and basins. A personal touch from Jordan and Russell, who have an Amiata bath in their own bathroom. Normally available in a choice of 200 RAL colours, 2LG challenged Victoria + Albert to create a special colour spray effect. This creates the impression that the baths and basins are growing organically from their base.

The bathroom brassware has been chosen from new Riobel bathroom collection. The Parabola bath-shower mixer and the Parabola wall-mounted basin mixers epitomise Riobel’s sculptural forms, with the parabolic curve of the spout reflecting the Cave of Wonders concept.