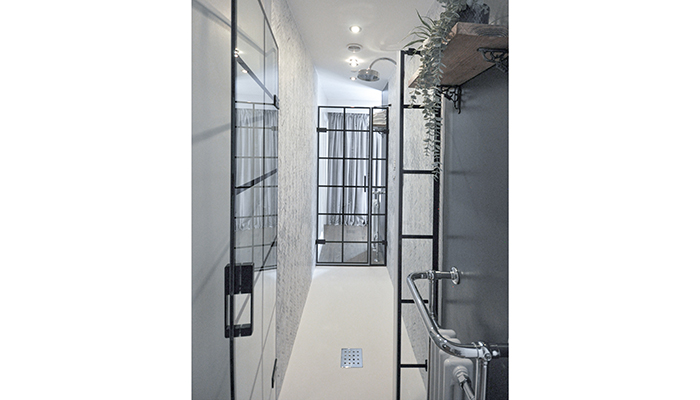 
Shower enclosure designer and manufacturer Roman has revealed its support for Instagram influencer, Frankie Walsworth, as the brand provided her with her walk-through shower area during the renovation of her 1850’s farmhouse.

The walk-through shower area is a unique space that came about as Frankie’s bedroom en-suite only had enough room for a sink and toilet. The couple used Pinterest for inspiration and liked the space-efficient idea of housing a shower behind a panelled wall.

After trawling Pinterest and Instagram for images of black metal and industrial black grid doors, Frankie stumbled across Roman’s Liberty Black Grid Hinged Doors and thought they would be ideal for the project.

Frankie Walsworth, commented: “We went for a long while without doors but this was always temporary and the space always felt unfinished. Now that the doors have been added I no longer flood the lounge when the shower tray overflows! The finish of the doors is beautiful; the perfect addition to any shower area. Our vibe is modern country but these beautiful doors wouldn't be out of place in a more modern or eclectic interior either.”

Sophie Stanwix, marketing communications manager at Roman, said: “It was an absolute pleasure to work with Frankie from start to finish. The end result was everything she hoped for and the Liberty Black Grid Doors were the perfect finishing touch.”