Amy Nicholson: Women going into trades could earn more than £50k by 25 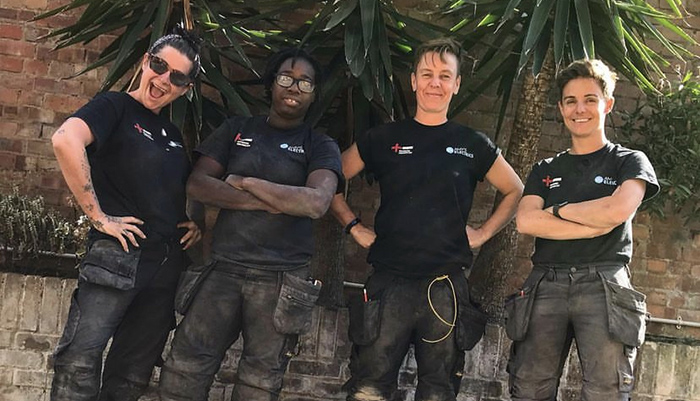 Amy Nicholson: Women going into trades could earn more than £50k by 25


Amy Nicholson, owner of Amy’s Electrics, has worked with electricians who are women for 12 years and has owned her own company for the last five years. She's passionate about helping more women to see the amazing opportunities in the trades – and here’s her story.

Getting into the industry
Amy became an electrician when she was 26 after meeting a woman who was a plasterer. This was the first time she had ever seen a woman working within the trades industry and it was never something that she considered, as it was never suggested to her in school.

Thinking back to school, Amy recalls that those who went into the trades were thought of as not academic, or not clever enough to go to university. She thinks this mischaracterisation needs to change, and she says for her ‘it’s the best thing she has ever done’.

Amy found a well-respected electrician named Kaye who was keen to help young women by giving them the skills that they needed to succeed in a trade profession. Kaye acted as huge source of inspiration throughout Amy’s career and gave Amy the passion to ensure future tradeswomen are made to feel welcome and given the correct training for the future, which led to her starting Amy’s Electrics.

‘Tradespeople’ not ‘tradesmen’
As somebody who wants to see more women coming through the ranks, Amy doesn’t like how the workforce is often referred to as ‘tradesmen.’ She finds it upsetting that it’s the blanket term that’s used to describe women like her and her team.

She remembers a big tradesperson platform had created a TV advert that promoted ‘how to find tradesmen’, which she couldn't believe. "On social media I'm part of a group of over 800 electricians who are women – and that's just electricians! There are so many of us who aren't represented by that term.”

Representation of women in the field
When she started training, she was working with other women who had experienced discrimination in the workplace. One of her colleagues remembers one job where men put down their power tools and shouted to ask what women were doing on site. Another experienced tradesmen ripping out the women's toilet on site to prevent them from being able to work on the job.

Amy says: “If only more young girls are given the same opportunity that I was lucky enough to have – telling them they can get a solid career in the trades industry, they can earn their own money – good money, too – and they will have a skill that they can use forever in an industry that is always going to be needed. But it's not communicated like that in school.

"I truly believe that the biggest barrier for me was not knowing about the opportunities in the industry, and not even hearing of women going into trades. It wasn't until I was 26 that I started training, which shows how long it took for me to even be introduced to this world.”

A time for change
It's so important to get everybody to feel like they belong in this industry. But to make this happen, Amy wants to see bigger companies offering apprenticeships to young people so they can train them up and show them they are worthy of learning these skills.

She says: “I think showing how there is a demand for women in the trades is key. Many homeowners actively search for women to carry out work in their homes, which is great for us! Also, promoting the opportunities to young women is important – if young people take up a trade at the age of 18, they could easily be earning upwards of £50k by the time they are 25 – the opportunities are huge.”

“Also, offering young women apprenticeships will help them to get their foot in the door because the greatest barrier to getting into the industry is experience. You can get all the qualifications without ever doing a job on your own and it's so important that you have that practice under your belt to prove your worth.”

Rated People has launched a campaign for a more diverse trades industry: https://www.ratedpeople.com/blog/inclusive-job-titles

Pictured: Amy Nicholson, second from right, with some of the team from Amy's Electrics.