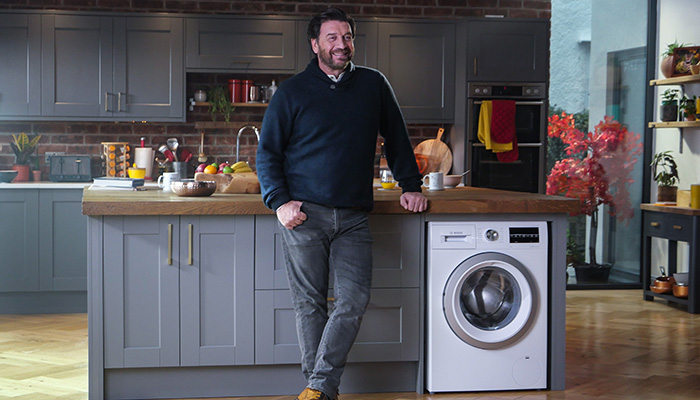 
Euronics has revealed that Nick Knowles, the star of BBC’s DIY SOS, will once again lead its above-the-line promotional campaign that launches to a national TV audience of millions on Christmas Day 2020. Airing on ITV, Channel 4, Sky and UKTV channels, the new campaign begins with a 30-second TV ad that will run until 20th January 2021, and is supported by additional advertising and promotional content, appearing on TV and radio as well as in national newspapers, online and social media.

In the main TV ad, viewers see Nick in a kitchen setting at home, telling the story of how Euronics stores have provided local service for generations. The narrative plays out against a backdrop that shows Nick, having placed an order online for a new fridge-freezer from his local store, accepting delivery to the words, “delivered locally, just as it should be”. In addition to this main feature, Nick has filmed a series of shorter ads that will be shown during the festive period.

“Nick Knowles and Euronics stores are a perfect fit,” says Stuart Cook, CEO of Combined Independents (Holdings) Ltd (CIH), the electrical buying group, part of Euronics, Europe's largest electrical buying group. “Our stores are all about supporting the local community and family values that have existed for generations. Nick Knowles clearly shares those same values and that love of heritage. It’s a great message that we’ll be taking to millions of people across the country in the next month, starting on Christmas Day.”