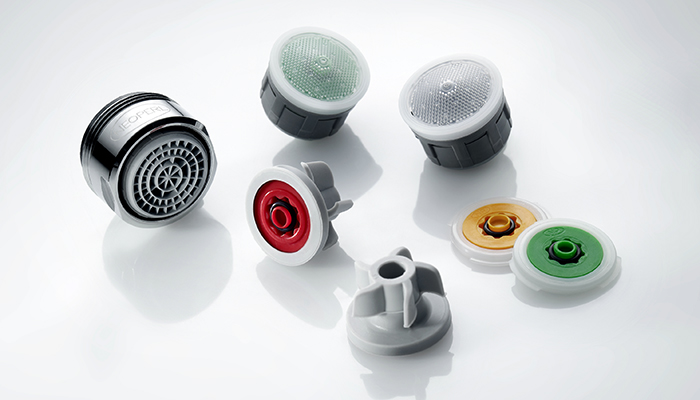 
UK manufacturer Neoperl, which is part of the German-Swiss Neoperl Group, is promoting awareness in the marketplace of how the introduction of flow regulators can help control the flow of water through kitchen and bathroom taps. While most taps will already include a flow-control device at the end of the spout, Neoperl says that it’s often only when in situ that it's possible to identify whether the flow is too strong.

Neoperl is spreading the word as to how the incumbent device can be easily removed and replaced with one that reduces the flow to a level that doesn't splash. The same can be done with showers, as the company says that a valve shower often delivers far too much water, and even a slight reduction adds up to a substantial water saving over the year.

A flow regulator maintains a consistent water stream at the chosen flow rate, regardless of the prevalent water pressure. A typical flow regulator consists of three components – a housing, a seating area and a precision-ring. The flow is determined by the interaction between the seating area and the o-ring. As water flows through the device at a higher or lower pressure, the shape of the o-ring changes to restrict or release the flow of water.

Neoperl is encouraging those working on kitchen and bathroom projects to inform homeowners about the benefits and the low cost involved in fitting such a device. The company said: 'It’s a really affordable solution to retro fit a flow regulator, most consumers could do it themselves with a little advice. They simply need to be aware that flow regulators exist, obtain the right advice as to which regulator to fit to retain adequate performance, and purchase a simple tool to fit it.'