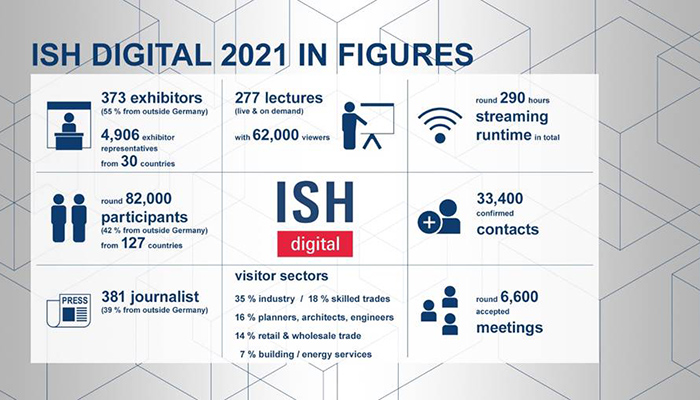 
Messe Frankfurt, organisers of ISH digital 2021, have revealed that over the course of the virtual exhibition from 22nd to 26th March 2021, around 62,000 views watched 277 live and on-demand events. However, another 13,000 participants were added after the end of the event in the 'post-fair phase' until 1st April, taking the number to approximately 82,000 participants. This meant that a total of around 6,600 meetings were held, as people took advantage of networking opportunities during and after the event. All in all, some 290 hours of content were broadcast during the digital fair.

Wolfgang Marzin, president and chief executive officer of Messe Frankfurt, said: “We wanted to launch a high-quality networking platform and present themes of importance to the sector in a concentrated way. I think we succeeded in this. By holding ISH digital, we have been able to gather a lot of experience for hybrid events in the future. Visitors appreciated the range of products and services offered. And our exhibitors remain firmly behind ISH.”