Whirlpool collaborates on NASA project to send fridge into space 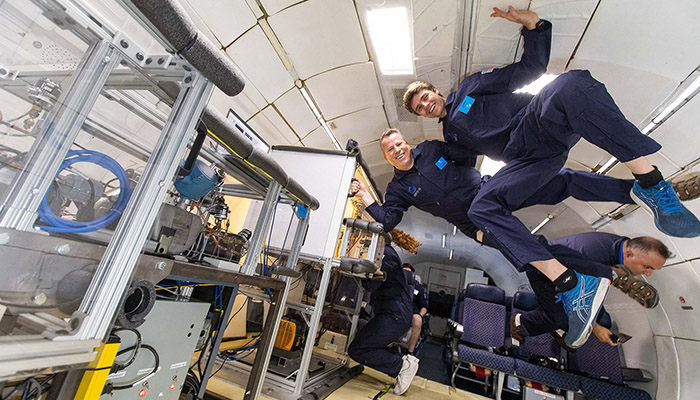 Whirlpool collaborates on NASA project to send fridge into space


Whirlpool Corporation has announced it is joining a team of engineers from Purdue University and compressor manufacturer Air Squared to pioneer a specialised refrigerator designed to operate in zero gravity for future space missions, including a possible Mars mission.

“Air Squared approached Whirlpool Corporation to be a Phase II-E investor on an oil-free refrigerator for flight testing. Air Squared has been developing oil-free compressors for 30 years, which is a necessary part of the design due to the weightless conditions that the refrigerator would experience in outer space,” said Alberto Gomes, who headed up a team of engineers from Whirlpool Corporation on the project.

The most recent phase involved testing the refrigerator prototype in zero gravity. This was done by sending a group of engineers and the fridge for a series of flights on an aircraft operated by Zero Gravity Corporation in Fort Lauderdale, Florida that simulates the weightlessness of outer space by making multiple parabolic manoeuvres. Testing on the refrigerator was done during the flight by teams from Air Squared, Purdue, and Whirlpool Corporation in early May. Data from these flights will be used to make improvements to the microwave-sized refrigerator prototype.

“When my manager told me we would be working on this project, I was very excited,” said Whirlpool team member Sanjesh Pathak. “There were so many different things we had to think about – not only how to make it work in zero gravity, but how do we handle liquid and air flow, how do we handle defrosting, and what are the complexities associated with such small space constraints?”

All three principal partners had key roles in the project. “Air Squared brought the components, Purdue did a deep dive into the physics of space flight, and we provided our expertise in refrigeration,” said Gomes. “It was a very collaborative process.”

The next stage for the project could include sending the refrigerator to the International Space Station for further testing.