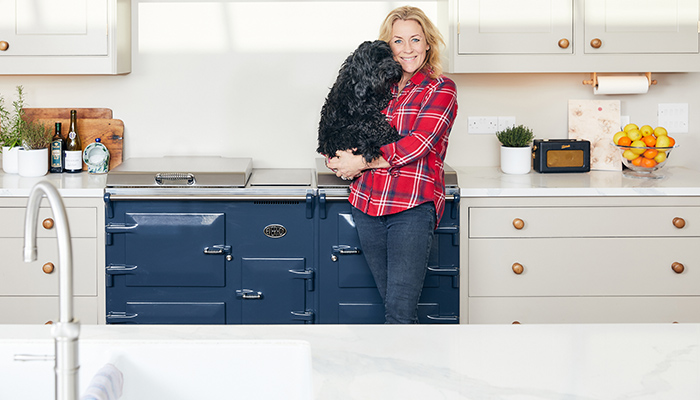 
Broadcaster and presenter Sarah Beeny and her husband Graham have embarked on the building of a carbon-neutral stately home in Somerset. Once a dairy farm and now a modern and functional family home, the Channel 4 TV programme A New Life in the Country follows Beeny’s trials and tribulations when combining aesthetics and carbon-neutrality, tradition and modernity and old and new.

In the first series, the couple concentrated on building the shell of the house as well as improving the land by planting thousands of trees. In the show’s second series, Beeny concentrates on the interior of the house. After installing a grand staircase, creating an elaborate dining room and hand tiling their bathrooms, the TV show turns to the designing of the kitchen.

To create a greener yet traditional-style kitchen, Beeny chose a Marine Blue Everhot 150+ heat storage range cooker running off electricity powered by solar panels. By running on electricity, the Everhot has flexible control which enables year-round use as users can lower the heat output and running costs in warmer months using the ‘ECO’ timer control Beeny said: “It really suited us to have a warm kitchen with a single source of constant heat. That is why we chose the Everhot. All the electricity is created from solar panels and stored in a power wall battery. Without the Everhot in the kitchen the whole plan would have been flawed. I can honestly say I would never have another cooker.”

The Everhot’s controllability means it can remain on as the single source of constant heat in the kitchen – offering a dual purpose.