How The Main Company created a rustic kitchen with industrial features 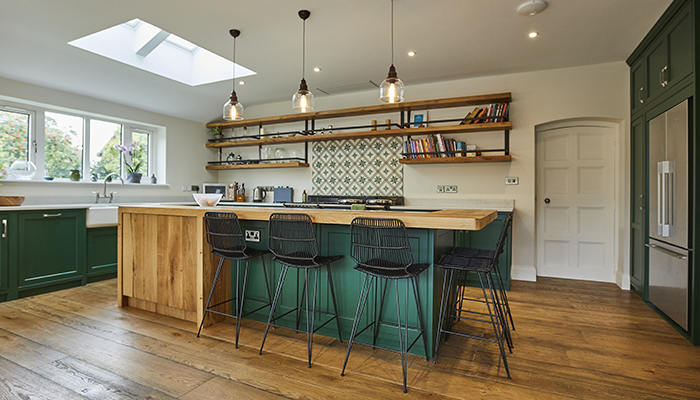 How The Main Company created a rustic kitchen with industrial features


When your clients are keen to create a country-style kitchen that also caters for contemporary lifestyle needs, what are the best ways to go about it? Tiago Carvalho, designer at The Main Company, reveals how he blended a mix of styles and came up with the perfect solution. Photography by Sean Knott.

Tiago's clients, who were based just outside York, had embarked on a major renovation of their Edwardian detached home, and had a clear vision of what their finished project might look like. They wanted a large, open-plan living area and also to add space for their family by introducing a playroom as well as a utility room, a boot room, snug, and downstairs bathroom. To enlarge the footprint, an old conservatory was demolished, allowing space for the 95sq m L-shaped extension.

They had two key requests ready for him when he arrived on the scene. "They wanted a kitchen with a big island, as they loved the idea of cooking and preparing food while talking to the kids or socialising with friends sitting around the island," he remembers. "They also wanted an AGA range cooker as the key feature. They had had an AGA in their old kitchen and loved the cosy feel it gave on a cold day, and wanted to create this again in the new space." 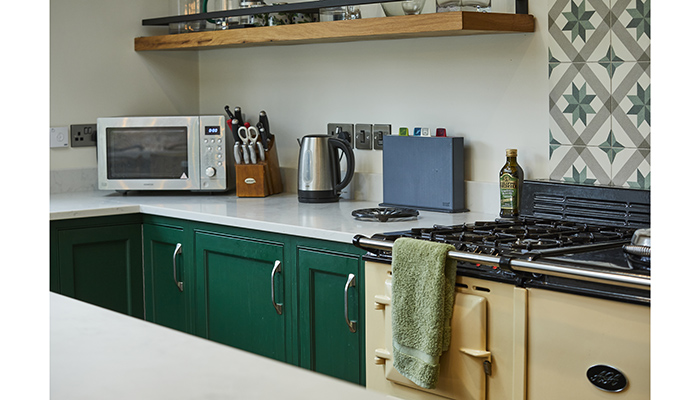 The extension is bright and airy, thanks to large full-length windows and skylights, and Tiago and the team set about meeting the brief. "The client wanted a family room, where they could easily spend time together, either at the island or dining area, so we had to keep that in mind when planning the space. The island had to be quite big, but being a family of five with two dogs, we had to find the right balance between the volume of the island and the free space surrounding it – the AGA was the other element that had to be worked around." 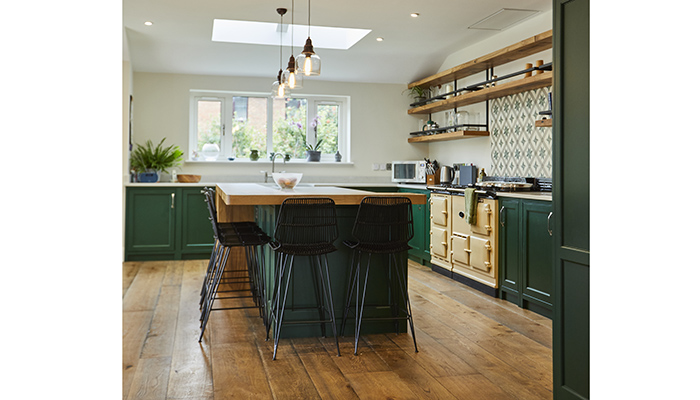 It was the AGA, and the wall behind it, that threw a curveball into the design mix and presented a particular challenge, says Tiago. "The wall behind the AGA took several attempts to get to the final result. We worked closely with the client. Wall units were out of the question, so we had to try different approaches." 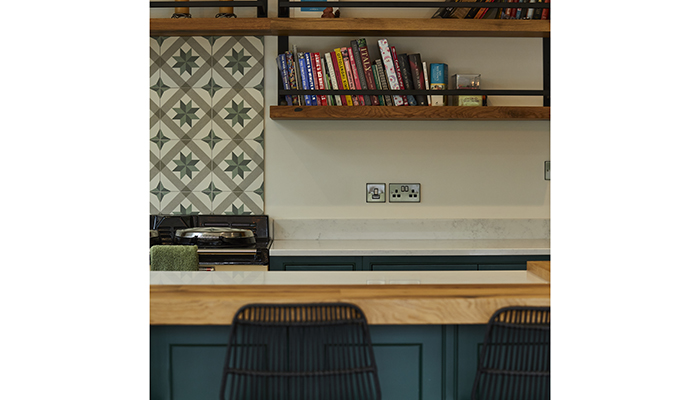 They came up with a mix of ideas that proved both practical from a storage point of view, and effective from an aesthetic perspective as the AGA became the centrepiece of the space. 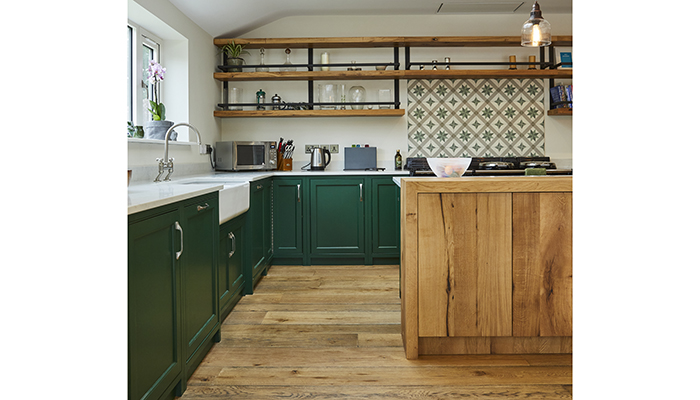 "We had a mix of wall to work with – surface units on one side with shelves only on the other – and it took a few attempts until we reached the final result," says Tiago. The finished design features a unique powder-coated steel rack with reclaimed French oak open shelves that transform it into a stunning feature wall. To finish off this area, the homeowners chose a Moroccan style tile that works beautifully with the AGA, French oak, and cabinetry. 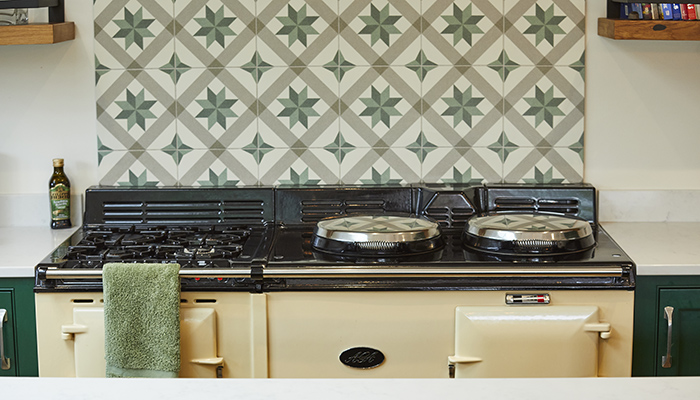 A country-style scheme with industrial features, the kitchen cabinetry has been finished with ‘Puck’ paint by The Little Greene Paint Company – an opulent green shade. 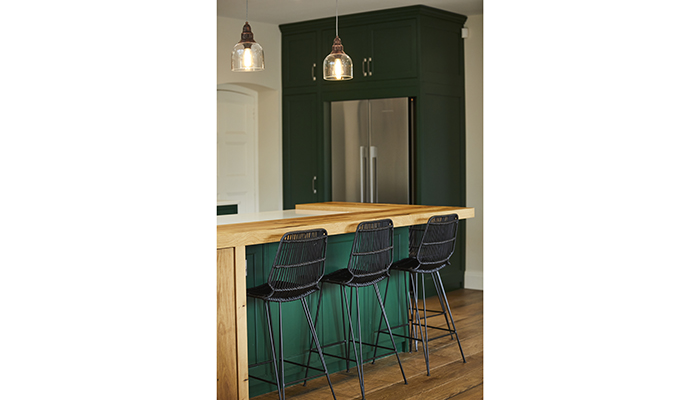 Tiago says that his favourite part of the design is the open shelving, while the clients also love the AGA and the island, and are delighted with the finished result. But what would his advice be to a designer starting out on a similar project?

"I would say, respect the heritage and location of the building. But the most important advice of all is to get to know your client, listen to their wants and needs, and make sure that at the end they are happy and in love with a space that they will end up spending most of their time in," he concludes. 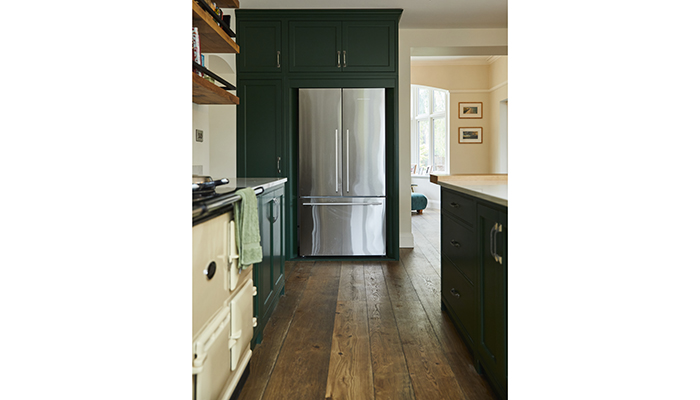